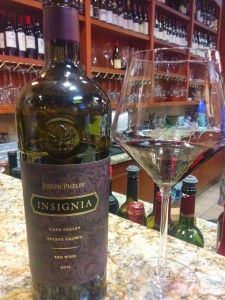 Joseph Phelps is one of the iconic wineries in Napa Valley. They’re known for their Cabernet Sauvignon and the Insignia blend is their flagship (and most expensive) bottle. Insignia is also one of the most hyped and talked about wines in Northern California. Depending on who you ask, this bottle is either the nectar of the gods, or just another over-priced and over-hyped Napa Cab. Either way, Joseph Phelps Insignia is a wine that has become a status-symbol in many circles.

What does it taste like, and more importantly, does it live up the the hype and $225 price tag? Read on to find out.

What does it taste like? This is a Bordeaux-style blend, which means there are many different grapes used to produce this wine. Wines like this are more complex and nuanced than most single varietal bottles and Insignia is no different. It’s medium bodied with a licorice, coffee, vanilla bean and black cherry personality. The dark fruit flavors are subtle and not central to the character of this wine the way it is to other big Napa reds. Instead, this is a thin, earthy red blend that finishes with anise and a touch of dust in the end note. I love the finish, which gives you a nice chocolate covered blueberry and plum accord.

Is it worth it? I have to admit that I had pretty high expectations about this wine. The sheer amount of positive reviews coupled with the high price tag had my senses heightened to superhuman levels during my tasting. In my opinion, I think this wine is a victim of its own hype. The good news is the wine itself really is delicious. If the description of the flavor profile sounds tasty, that’s because it is. However, you’ll notice that my description talks about the thin fruit, which left me somewhat underwhelmed. I wasn’t expecting a fruit bomb, but the wine felt lacking. The fruit felt too underripe and the tannins too strong. I’ve talked to a few somms about my experiences with the 2011 and they’ve all said that it needs to age about 10 years before it reaches it’s peak. That means you’d have to cellar this bad boy until 2021 before you uncork it. I don’t know about you, but if I’m dropping $200+ on a bottle of wine, I don’t want to have to wait a decade to enjoy it. Ultimately, I think there are too many other high quality reds at a far more reasonable price point.

Who will love this wine?

-Status Symbol Seekers. Insignia has definitely developed a cult following. The same way cult-classic films tend to have a polarizing reaction, certain wines fall into that same category. Virtually no other bottle evokes a reaction like the Insignia. The mere mention of it’s name in certain circles evokes hushed, reverential tones. If you want to impress the most pretentious wine snob, invest in a bottle of Insignia.

-Want to up the cool-factor. The running joke at my house is that Joseph Phelps Insignia is the ultimate hipster wine. If you want to impress the in-crowd and have a bit of cash to do it, bring a bottle of Insignia to your next party. I guarantee there will be at least one person picks up the bottle oh-so-cooly and says “Ooooooo. Who brought the Insignia?”. You’ll earn instant cool-points. You should also be prepared to sit through stories about how that same guy has been drinking Insignia before it was cool.

-Special Occasion Celebrators. If you have a big milestone or event and want to toast with something other than champagne, reach for Joseph Phelps Insignia. Definitely a great special occasion wine.

Before I start getting hate mail from thousands of Insignia lovers, let me clarify. If someone offers you a glass of Insignia, you should gladly take it. If you’re looking to buy a quality bottle of wine, I don’t think Insignia is worth the $225 price tag. There are lots of other Napa Valley reds that can stand up to the Insignia at a fraction of the price.

So there you have it. My take on a very popular Napa red blend. What are your thoughts on Joseph Phelps Insignia? Do you have a different opinion? If you try it, let me know in the comments below.